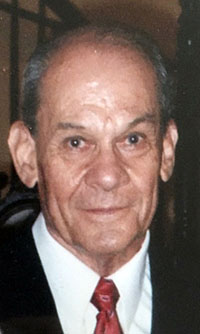 Vaughn Benton Schindler, 95, of Berne passed away Monday, November 16, 2020, at Swiss Village in Berne. He was born March 20, 1925, in Berne to John W. and Alieda (Sprunger) Schindler. He was married January 22, 1950, to Patricia Lou Reusser.
He was an electrical contractor and the owner of Schindler Electric in Berne for 40 years before retiring in 1990. He was a Captain in the U.S. Air Force and served in the Pacific during WWII. He also served two years in France during the Korean War. His wife and daughter lived with him in France during his years of service there.
He was a charter member of Berne Lions Club, a member of American Legion Post 468, former member of the Berne Volunteer Fire Department and a former member of the Berne Library Board. He was a member of Trinity United Methodist Church in Berne and served on various church committees throughout the years.
He is survived by two daughters, Deborah K. Dingledy of Indianapolis; and Anne M. (Dave) Stauffer of Berne; son, John W. (Nancy) Schindler of League City, Texas; seven grandchildren, Eric (Jessica) Dingledy; Mark Dingledy; Todd (Jennifer) Stauffer; Jenna Stauffer; Dr. Nick (Jandi) Schindler; Jeff Schindler; and Alex Schindler; and three great-grandchildren, Lucas and Tyler Schindler; and Rowan Dingledy.
He was preceded in death by his parents; his wife; and two brothers, Lt. Colonel Hallman W. Schindler; and Captain Ted K. Schindler.
Due to the COVID-19 pandemic, there will be no visitation. There will be a private viewing for family only. Burial will be at MRE Cemetery in Berne.
Memorials may be made to Swiss Village Samaritan Endowment or Trinity United Methodist Church.
Arrangements provided by Zwick & Jahn Funeral Home, Yager-Kirchhofer Chapel in Berne. To sign the online guestbook, visit www.zwickjahn.com.