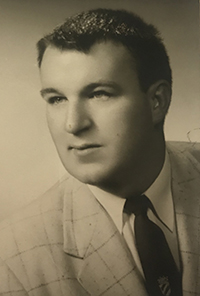 Thomas E. Agler, 90, of Berne passed away Saturday, July 4, 2020, at his residence. He was born January 16, 1930, in Van Wert, Ohio to H. Eugene Agler and Nora E. Gilliland. He was married July 17, 1955, in Berne to Kathleen J. Dubach.
He was a 1948 Van Wert High School graduate and enlisted in the U.S. Navy serving during peacetime.  While in the U.S. Navy Seabees, he earned a surveyor certificate. He put himself through Ball State Teacher's College earning a B.S. in education and a master's degree in library science and was a Theta Chi Fraternity charter member. He received a lifeguard certification at the age of 42.
During his 51 year teaching career with the South Adams School system, he taught social studies, health/PE, math and English for grades K-12. He was a librarian, AV director for school plays and a driver's education instructor. He was a coach with the Hartford Center Gorillas and the Geneva Cardinals, where he coached basketball, cross country, volleyball, swimming and baseball. He retired from teaching June 1, 1994. In addition to teaching, he held a number of summer jobs including Meshberger Bros. Stone Quarry and as a Columbus Mutual Life insurance agent.
He attended First United Methodist Church in Geneva. He was a member of the Swiss Heritage Society, the Indiana State Teachers Association, the Civil War Trust Fund and the Colonial Williamsburg Foundation.  He was one of the teachers that successfully lobbied the Indiana State Assembly to guarantee year-round pay for teachers.
He loved history and wanted to share this passion with others. Every family vacation was planned around historical sites. He was a key advocate in creating Adams County historical tours for students as well as Gettysburg/D.C./Williamsburg trips for South Adams, Adams Central and Bluffton students.
He really loved basketball. He enjoyed both Ohio State and IU. His 1957 Hartford team won sectional and has been featured at the Indiana High School Basketball Hall of Fame.
In his free time, he loved fishing, hiking and mowing, mowing and mowing.
He is survived by his son, Jeff Agler of Berne; three daughters, Terri Agler of Berne; Lisa Wrightsman of Indianapolis; and Beth (Rodney) Rudolph of Dumfries, Virginia; sister, Janet Hines of Van Wert, Ohio; and six grandchildren, Alicia A. Agler; Joanie Agler; Jason Agler; Zachary Wrightsman; Alex Wrightsman; and Bridgette Rudolph.
He was preceded in death by his parents; his wife on November 23, 2013; sister, Patricia Spriggs; and daughter-in-law, Jane Agler.
Visitation will be Sunday, July 12 from 12-5 p.m. at Zwick & Jahn Funeral Home, Yager-Kirchhofer Chapel in Berne. The family requests those attending the visitation to wear a face mask. Due to his wishes, there will be a private graveside service at a later time.
Memorials may be made to Adams County Council on Aging.
Arrangements provided by Zwick & Jahn Funeral Home, Yager-Kirchhofer Chapel in Berne. To sign the online guestbook, visit www.zwickjahn.com.