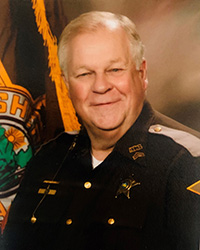 Terry L. Nevil, 72, of Berne passed away Sunday, July 19, 2020, at 1:18 p.m. at Swiss Village in Berne after an extended illness. He was born Thursday, May 27, 1948, to Clarence and Thelma (Loper) Nevil.
He was a 1966 graduate of Geneva High School and a 1976 graduate of Indiana Law Enforcement Academy. He served as an Adams County Sheriff’s Deputy Sgt. for 32 years, retiring in 2011. He is an active 49-year member of the Geneva Volunteer Fire Department. He was a loyal public servant, serving countless members of the Adams County community throughout his lifetime. He was a member of the Indiana Volunteer Fireman Association and one of the first to become an EMT in Adams County. He was an Elvis fan. He enjoyed classic cars, racing and especially helping at Eldora Speedway.
He is survived by his six daughters, Heather (Terry) Kongar; Shannon (Lynn) Herman; and Alicia (Josh) Tankersley; all of Berne; Ashley (Rusty) Richmond of Bluffton; Chelsey (Noah) Polakovic of Laotto; and Brianna (Sean) McGuiggan of Garrett; sister, Jeane Baumer of Berne; brother, Virgil Nevil of Union City; grandchildren, Kaylea, Randall, Hunter, Kirstien, Zachariah, Samantha, Madisyn, Lillian, Jossilin, Calli, Audrie, Anslee, Grant and Hannah; and great-granddaughter, Ellie.
Visitation will be Saturday, July 25 from 2-8 p.m. and one hour prior to the 2 p.m. funeral on Sunday, July 26 at Downing & Glancy Funeral Home, 100 N. Washington St., Geneva. Officiating will be Pastor Roy Nevil. Burial will be at Riverside Cemetery in Geneva.
Memorials may be made to the Geneva Volunteer Fire Department, 200 E. Line St., PO Box 203, Geneva, IN 46740; Adams County Sheriff's Department, 313 S. 1st St., Decatur, IN 46733; or Hoosier Burn Camp, PO Box 233, Battle Ground, IN 47920.
Arrangements provided by Downing & Glancy Funeral Home in Geneva. Online condolences may be made at www.glancyfuneralhomes.com.