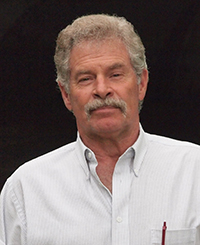 A note from Terry’s loving wife, Lois: “To describe Terry in one word, it would be kind. To know Terry was to love him and have a friend for life. He was a man of God and a prayer warrior. He was my best friend and a gift from God to me. We were married December 6, 2003, at Springhill Church in Berne, and I was so honored to share his name, his loves and his life as his wife for 17 years.”
Terry Wayne Guerin, 69, of Van Buren, received his ultimate healing and went to heaven Sunday, February 7, 2021, at 8:14 p.m. at his home. He was born July 5, 1951, in Bluffton to Dale E. Guerin and Alice J. Keller.
He graduated from Elmhurst High School in 1969 and attended IU/Purdue Fort Wayne and airline school in Kansas City. He worked as an EMT and fireman in Laramie, Wyoming and also ran a successful steam cleaning business. After living in Colorado and Wyoming, he returned to Fort Wayne but never lost his love for Wyoming. He worked for Magnavox and Auburn Foundry. He got his CDL license and worked for 20 years as a boom truck and crane operator delivering materials to construction sites for West, North Coast and Shelter.
He was passionate in his love for God and his country and stood up for freedoms and liberties. He and his wife are members of McNatt Church, and he was also active in the Grant County Tea Party.
He was a man of many talents. He loved blacksmithing and woodworking. He belonged to the Rural Smiths of Mid-America and the Indiana Blacksmithing Association. He loved old barns and belonged to the Indiana Barn Foundation. He strongly believed in saving history and heritage.
He loved all animals especially horses, buffalo, oxen and cats. He worked on a ranch with buffalo in Wyoming, rode a bull at a rodeo on a dare and worked on real old-fashioned cattle drives. He belonged to Midwest Ox Drovers Gathering and was excited to occasionally drive a team of oxen at the gatherings and at Conner Prairie. His dream of having a few buffalo on his land never happened but Heaven surely has a buffalo or two for him. He even had compassion for the stray cats his wife talked him into adopting and gave them lots of loving.
He is survived by his wife of Van Buren, two sons, Matthew Wayne (Sara Marie) Sullivan of Germany; and Micah Clifford Sullivan of Berne; sister, Sandra (John) Wright of Roanoke; and nephew, Daniel Wright of Roanoke.
A note from daughter Sara:
“My father-in-law, Terry, passed away last night. He married my beautiful mother-in-law when Matt and I were 30. He was one of the most patient, caring and kind men I have ever known. We were always thankful that Lois Guerin had him in her life. He loved and cared for her. It was a running joke that he helped ‘keep her out of jail’. Terry doted on her for many years. They were absolutely best friends. He was sick for the last couple of years. He would be sick in the hospital for four or five days, and the day he was released go and mow. His place has always been immaculate, and he took pride in its upkeep. Not too long ago, mom called me upset because Terry was planning on getting up on the barn roof. We talked him out of it, that time. He took a lot of pride in his appearance as well. I never saw him in a wrinkled shirt. I never saw him once without his hair perfectly done. He did have a pair of rotten old farm shoes that had been duct taped for years. He kept them for the dirty chores. We gave him a hard time about those shoes for many years. I loved that. He was a wonderful Grandpa Terry to our pups, Snaps, Little Debbie, TaTer and Trixie. Lois and Terry are where our beloved “chicken” came from. He would get tickled when he would hear Trixie squeak “chicken” when we were on the phone. He would always ask about my family. He gave really good compliments. I loved feeding him my cooking, because he was always hungry. I loved being his daughter-in-law. He always took my side, if there was a side to take. He liked me best. Just kidding, but always made me feel special. He will be sorely missed by his friends and family. I would just like to say thank you to his friends and friends from church. You have all been so supportive through the hospital stays and illnesses. As the adult children, who live overseas, we are incredibly grateful for all that you have done. God bless you all. It was a blessing to have him in our lives. We are eternally grateful for how much he loved our mom. He will be missed. He will be celebrated. He is no longer in pain. His miracle was his freedom. We love you and look forward to our reunion. God bless."
Services will be held at a later date.
Arrangements provided by Glancy-H. Brown & Son Funeral Home in Warren. Online condolences may be made at glancyfuneralhomes.com.