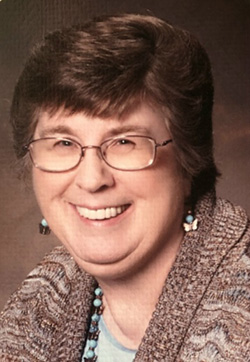 Sharon Kay Allspaw, 75, of Berne passed away Friday, December 18, 2020, at Lutheran Hospital in Fort Wayne with her children by her side. She was born on January 14, 1945, in Sturgis, Michigan to the late Rev. Raleigh and Marie (Brothers) Walker.  She was united in marriage June 8, 1969 to Richard H. Allspaw.  He preceded her in death October 22, 2011.
She received her bachelor’s degree in home economics from Manchester College and a master’s degree in library science from Indiana University, Bloomington.  She began her career as the elementary librarian at Adams Central Community Schools.  She later became the crafts director at Swiss Village Retirement Community from 1974-2011 and was currently serving as their librarian.
She was a longtime member of Trinity United Methodist Church and actively served in many capacities including secretary and treasurer of the United Methodist Women, Staff Parish Relations Committee chair, Sunday school teacher, Bible study leader and church historian.
She is survived by her daughter, Leanna (John) Ginocchio of Marshall, Minnesota; son, Gregory (Elizabeth) Allspaw of Avon; sister, Joanne (Ray) Irons of LaPorte; brother-in-law, David (Fran) Allspaw of Sidney, Ohio; and four grandchildren, Kayli Ginocchio of Fargo, North Dakota; Jacob Ginocchio of Marshall, Minnesota; and Ethan and Gretchen Allspaw of Avon.
The family will receive callers from 12-4 p.m. Saturday, January 2, 2021, at the Zwick & Jahn Funeral Home, Yager-Kirchhofer Chapel in Berne and one hour prior to the 2 p.m. funeral service on Sunday, January 3 at Trinity United Methodist Church in Berne. Pastor Mark Walus and Rev. Barry Humble will officiate.  Burial will follow at M.R.E. Cemetery. You are invited to visit and “like” the Facebook page for Zwick & Jahn where a video will be live streamed Saturday during the service.
Preferred memorials are to Trinity United Methodist Church or Swiss Village Retirement Community.
Arrangements provided by Zwick & Jahn Funeral Home, Yager-Kirchhofer Chapel in Berne.