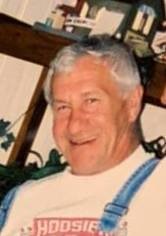 Ronnie “Ron” G. Smitley, 76, of Ossian passed away Tuesday April 21, 2020, at his home. He was born June 11, 1943, in Berne to Cecil and Ethel (Hunt) Smitley. He was married January 8, 1972 to Madalene C. Smitley.
He graduated from Berne French High School in 1961. After high school, he became an apprentice at General Electric and retired after 30 years of service as a mechanical engineer. He was an avid woodworker and gardener. He enjoyed fishing and loved his home and pond in Ossian. He was always quick with a joke and had a joyous attitude for life. He will be missed by all that knew and loved him.
He is survived by his wife of Ossian; two daughters, LaNae (John) Abnet of Geneva; and Cassie (Blair) Ballard of Newport News, Virginia; son, Jeff (Denise) Smitley of Vandalia, Michigan; three step-children, Kristina (Jay) Combs; Robert Adkins; and Carol McGee, all of Fort Wayne; two sisters, Jerry Mae Kuhn of Geneva; and Karen Hartman of Berne; two brothers, Richard Smitley of Fort Wayne; and Jay Smitley of Berne; 13 grandchildren; and 19 great-grandchildren.
He was preceded in death by his parents; sister, Anna Bollenbacher; and brother, William Smitley.
Private services will be held with burial at Covington Memorial Gardens.
Arrangements provided by D.O. McComb and Sons Lakeside Park Funeral Home in Fort Wayne. To sign the online guestbook, go to www.domccombandsons.com.