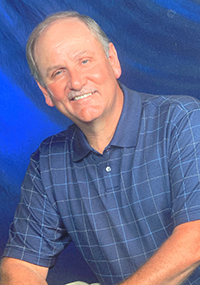 Ronald W. Patterson, 64, of Berne went to be with his Lord and Savior Friday, July 17, 2020, at Hospice Home Southwest in Fort Wayne. He was born October 12, 1955, in Smyrna, Tennessee to Charles “Bill” and Alice (Myers) Patterson while Bill was serving in the US Air Force. He was married August 14, 1976, to Kathie Neuenschwander.
He was a 1974 graduate of South Adams High School. He was a faithful member of First Missionary Church in Berne, where he served as an usher and a camera operator. He entered the workforce as an upholsterer for 15 years with Dunbar Furniture until the plant’s closure. For the past 23 years, he was employed by Berne Ready Mix as a mixer driver.
He grew up riding motorcycles with his dad and brother. One memorable trip involved all three Patterson men (the brothers still teenagers) riding together to Smoky Mountain National Park. Through the years, he was always eager to take his sons and his grandchildren for a ride on the back of his various motorcycles from his 1976 Honda SuperSport to his more recent Honda Gold Wing dubbed Big Red.
An avid reader, he frequented the subjects of United States history and Christianity. He listened to (old) country music and never stopped believing in the Chicago Cubs even after some brutal post-season collapses (1984 and 2003 especially). He will be remembered for his sense of humor and his laugh.
Perhaps no better word describes his life than constancy. He could be counted on to pack a lunch, do his job, keep his commitments, take care of his family and keep a level head and steady faith. Every morning for decades, he began his day with prayer and reading Our Daily Bread along with his Bible.
He is survived by his two sons, Nathan (Grace) Patterson of Mooresville; and Craig (Kimi) Patterson of Perryville, Maryland; two grandchildren, John and Audra Patterson of Mooresville; brother, Rick (Natalie) Patterson; two sisters, Carolyn Springer of Fort Wayne; and Rhonda Hayes of Berne; brother-in-law Rick (Sharon) Neuenschwander; and two sisters-in-law, Lori (Arne) Liechty of Berne; and Carole (Jeff) Billington of Bryant.
Visitation will be Monday, August 3 from 3-8 p.m. and one hour prior to the 10:30 a.m. funeral service Tuesday, August 4 at First Missionary Church in Berne. Officiating will be Pastor Rick Schwartz. Burial will be at MRE Cemetery.
Memorials may be made to First Missionary Church or Central Indiana Youth for Christ: Paul Hadley Campus Life.
Arrangements provided by Downing & Glancy Funeral Home in Geneva. Online condolences may be made at www.glancyfuneralhomes.com.