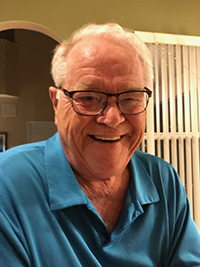 Robert Eugene Hill, 74, of Ft. Pierce, Florida passed away Sunday, February 23, 2020, at his home. He was one of seven children born to John and Bertha (Spohn) Hill.
He graduated from Berne High School class of 1964. He got his start in the floral industry in the mid-'60s at Das Blooming House in Berne. From there, he started The Flower Bowl in Berne and then All About Flowers in Fort Wayne. Over the years, he worked for several different floral companies in Fort Wayne. He won the Indiana State Designer of the Year award circa 1980. His design talents and his efficient methods made him a great asset for the wholesale side of the floral business.
In 2002, he retired with the intention to move to Florida to be close to his girls. He stopped off in Knoxville, Tennessee to visit the Brock family at Flowers Direct. He spent the next 12 years in Tennessee where he enjoyed working, spending time with friends, shopping, gardening and watching sports. He was a big fan of the University of Tennessee Volunteers. He regularly watched football and both men's and women's basketball. After moving to Florida, he continued to follow UT sports and would call his friends in Tennessee to discuss the games. His good humor and quick wit never knew a stranger. He always had a joke and a smile to offer those whose lives he touched on a daily basis. In Florida, he worked seasonal part-time as a designer at A Standing Ovation Florist in Port St. Lucie, Florida. He attended Parkview Baptist Church in Ft. Pierce, connecting instantly with Pastor Doug, who is also from Tennessee. Even after the cancer diagnosis, he never gave up hope, kept a positive attitude, was willing to go through whatever the doctors recommended and was determined he would live to be 100. He was a great spirit, a lot of fun and will be missed.
He is survived by two daughters, Tonya (Ricky) Rich-Rogers of Tampa, Florida; and Jennifer (Rick) Bartholomew of Port St Lucie, Florida; four grandsons, Jonathan Rich; Jordan Rich-Rogers; Zachary Bartholomew; and Branson Bartholomew; two brothers, Jerry (Marilou) Hill of Decatur; and Paul Hill of Berne; sister, Norma Hill of Berne; sister-in-law, Claudia Hill of St. Petersburg, Florida; nine nieces and nephews, Rick Hill; Scott Hill; Jeff Hill; Doug Hill; Christine Hoque; Paul Tupper; Johnny Tupper; Brandon Hill; and Carrie Grover their spouses and families; his extended family which includes Stanley and Sherry Brock of Knoxville, Tennessee; Wayne and Rhoda Brock of Knoxville, Tennessee; and Butch (Catherine) Brock of Chattanooga, Tennessee; and friends too numerous to mention.
He was preceded in death by his parents; teenage son, Gregg Alan Rich; brother, Jim Hill; infant sister, Judith Kay Hill; and recently his sister, Janice Tupper-Dryer.
A celebration of life service will be held in Indiana. More detailed information will be announced once confirmed.
Arrangements provided by Blount and Curry Funeral Home in Tampa, Florida. Memories may be shared at www.dignitymemorial.com.