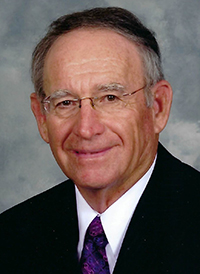 Richard A. Kaehr, 83, of rural Decatur passed away Sunday, December 26, 2021, at Adams Memorial Hospital in Decatur. He was born January 16, 1938, in Bluffton to Ezra and Mahilda (Gerber) Kaehr. He was married September 11, 1960, in Adams County to Karen Neuenschwander.
A 1956 graduate of Adams Central High School, he was a lifelong farmer, and he was also an owner and operator of an orange grove in Florida for many years, which he loved. He was a member of the Apostolic Christian Church, and in addition to working in his orange groves in Florida, he also enjoyed singing in the men’s quartet called the Zionaires. Since 1964, he and his wife enjoyed traveling to LaBelle, Florida and also spending winters in Florida later in life.
He is survived by his wife of rural Decatur; daughter, Sandy (John) Lichtle of Fishers; two sons, Doug (Tami) Kaehr of Ossian; and Greg (Amy) Kaehr of Decatur; four sisters, Carole Meyer of Alto, Michigan; Mary Jo (Bob) Troxel; and Sharon Imel, both of Bluffton; and Joy Birch of Fort Wayne; nine grandchildren, Stacey Lichtle; Justin (Olivia) Lichtle; Preston (Wendy) Kaehr; Cecily Kaehr; Natalie Kaehr; Ellison Kaehr; Gavin (Hannah) Kaehr; Morgan Kaehr; and Jake Kaehr; brother-in-law, Arlen Gerber of Decatur; and nine great-grandchildren.
He was preceded in death by his parents; sister, Jeanne Gerber; and two brothers-in-law, Vernon Meyer; and Dave Imel.
Private family services will be held at Goodwin-Cale & Harnish Memorial Chapel in Bluffton. The funeral service will be available to watch live via a Facebook Live link, which will be posted Thursday, December 30 at 11:30 a.m. at the top of his obituary page at www.goodwincaleharnish.com. Burial will be at the Apostolic Christian Cemetery in Adams County.
Memorials may be made to Christian Care Retirement Community.
Arrangements provided by Goodwin-Cale & Harnish Memorial Chapel in Bluffton. Online condolences may be made at www.goodwincaleharnish.com.