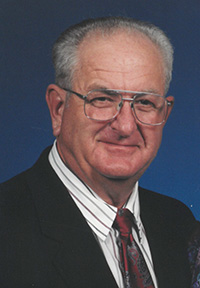 Richard E. Amstutz, 86, of Berne passed away Sunday, July 17, 2022, at Adams Memorial Hospital in Decatur. He was born November 7, 1935, in Berne to Omen and Selma (Hirschy) Amstutz. He was married November 8, 1956, at First Mennonite Church in Berne to Eldonna Habbegger. She preceded him in death September 25, 1999. He was then married January 12, 2002, at First Missionary Church in Berne to Hannah R. (Habegger) Schaadt.
He worked at Dunbar Furniture for six years and then started his employment at International Harvester for 30 years before his retirement.
He graduated from Geneva High School. He was a member of First Missionary Church, where he served as head usher and was a trustee for three years. He was also a member of the Antique Bike Club in Portland for several years.
He is a collector of Model A 29 and a Model A 31 pickup trucks. He had a love of old model trucks. Over the years, he had several ponies and horses that he had on his farm.
He is survived by his wife of Berne; two sons, Michael Amstutz of Fort Wayne; and Randall (Michele) Amstutz of Berne; daughter, Debra Wilson of Berne; three stepdaughters, Charlotte Hedrick of LaFountain; Jane (Ed) Millhouse of Garrett; and Theresa Brown of Berne; stepson, Henry (Penny) Schaadt of Berne; brother, Robert (Sarah) Amstutz of California; sister, Carolyn Christner of Decatur; six grandchildren, Jennifer (James) Schwartz; Zach (Cristy) Wilson; Aaron Amstutz; Amber Amstutz; Austin (Tabitha) Amstutz; and Ashley (Alena) Amstutz; eight great-grandchildren; 14 step-grandchildren; and eight step-great-grandchildren.
He was preceded in death by his parents; three brothers, Paul, Edward and Jim Amstutz; and sister, Mary Brewster.
Visitation will be Friday, July 22 from 4-8 p.m. at Zwick & Jahn Funeral Home, Yager-Kirchhofer Chapel, Berne and one hour prior to the 10:30 a.m. funeral service Saturday, July 23 at First Missionary Church in Berne. Officiating will be Pastor Dathen Foust and Pastor Jim Schwartz. Burial will be at MRE Cemetery.
Memorials may be made to First Missionary Church Missions, Miracle Hill in North Carolina or Lima Rescue Missions.
Arrangements provided by Zwick & Jahn Funeral Home, Yager-Kirchhofer Chapel in Berne. To sign the online guest book, visit www.zwickjahn.com.