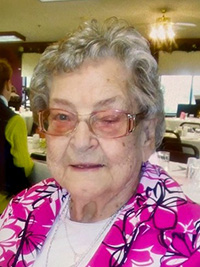 Mary Lou Haggard, 93, of Fort Wayne passed away Saturday, September 26, 2020, at Parkview Regional Medical Center in Fort Wayne. She was born January 28, 1927, in Fort Wayne to Fred C. and Mary (Teeple) Myers. She was married September 14, 1946, to Gerald A. Haggard.
She attended Portland Church of the Nazarene. She was a homemaker and co-owner of Haggard Camper Sales.
She is survived by her son, Ralph E. (Janis) Haggard of Wolcottville; daughter, Nyla L. Mousavi of Woodburn; five grandchildren; 13 great-grandchildren; and two great-great-grandchildren.
She was preceded in death by her parents; her husband on March 7, 2009; and seven brothers and sisters.
Visitation will be two hours prior to the 1 p.m. funeral service on Thursday, October 1 at Haggard-Sefton-Hirschy & Zelt Funeral Home in Decatur. Officiating will be Pastor Dave McClellan. Burial will be at  Tricker Cemetery.
Memorials may be made to Allen County SPCA.
Arrangements provided by Haggard-Sefton-Hirschy & Zelt Funeral Home in Decatur. To sign the guestbook, click on www.hshfuneralhome.com.