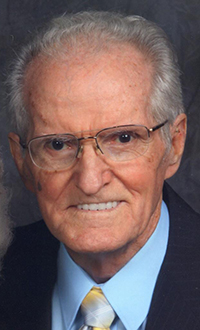 Rev. John Zurcher, Jr., 92, of Fort Wayne, formerly of Berne, passed away Monday, December 27, 2021, at Story Point West in Fort Wayne. He was born September 4, 1929, in French Township, Adams County to John and Aldena (Ebnit) Zurcher, Sr. He was married July 4, 1948, at the bride’s parents’ house to Bernadine Amstutz.
He was a member of First Missionary Church in Berne, where he was a former youth director and Sunday school teacher. He graduated from Geneva High School in 1947. He continued his education at Fort Wayne Bible College and received his B.A. in missions in 1958. He served with the Missionary Church as a missionary in Haiti for 20 years and as the district superintendent of the U.S. Eastern District for 14 years.
He grew up working on the family farm and was employed at Dunbar Furniture. He was a mason contractor, a carpenter and was the director of maintenance for Fort Wayne Bible College while he attended there. He also ministered as pastor to many churches, including Union Church in Bryant, Hollywood Missionary Church in Fort Wayne and Fort McKinley Missionary Church in Dayton, Ohio. He finally “retired” at the young age of 80.
He loved photography. In fact, he printed thousands of pictures in Haiti in his own dark room, bringing joy to many with his photos. He helped build many churches and schools and other mission buildings in Haiti and was one of the mechanics maintaining the mission vehicles. He also translated and wrote many lessons and teaching materials, such as Sunday school and theological education curriculum. He helped many Haitians learn how to read, and he helped start a radio station to reach more people with God’s Word. His passion was to love and serve his God, his family and others and to tell all he could about Jesus, bringing joy and laughter to many with his great sense of humor.
He is survived by his wife of Fort Wayne; three sons, Steven (Lynn) Zurcher of Fernandina Beach, Florida; Deryll (Bonnie) Zurcher of Geneva; and Stuart (Julie) Zurcher of Newton, Iowa; daughter, Janita (Marcus) Dye of Fort Wayne; three sisters-in-law, Connie Zurcher of Fort Wayne; Carol Zurcher of Huntington; and Margaret Zurcher of Indianapolis; 15 grandchildren and their spouses; four step-grandchildren and their spouses; 21 great-grandchildren; seven step-great-grandchildren and one on the way soon; and one great-great-grandchild due in March of 2022.
He was preceded in death by his parents; five brothers, Harry Zurcher; Floyd Zurcher; Leonard Zurcher; Norman Zurcher; and Allen Zurcher; three sisters, Florine Zurcher; Esther Zurcher; and Elizabath Wickland; and three infant siblings.
Visitation will be one hour prior to the 11 a.m. funeral service Thursday, January 6 at First Missionary Church in Berne. Officiating will be Pastor Dathan Foust. For the protection of Bernadine, the family asks that all who come wear masks. The service will be live streamed on the First Missionary Church website www.fmcberne.com. Burial will be at MRE Cemetery in Berne.
Memorials may be made to Missionary Church World Partners.
Arrangements provided by Zwick & Jahn Funeral Home, Yager-Kirchhofer Chapel in Berne. To sign the online guestbook, visit www.zwickjahn.com.