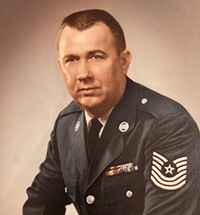 John H. Parrish, 90, of Decatur went to be with his Lord Wednesday, September 22, 2021. He was born December 2, 1930, to Kenneth and Genevieve (Walters) Parrish. He was married in 1952 to his sweetheart, Patricia Reed.
He enlisted in the United States Air Force on November 15, 1951. He worked in aircraft electronics. During his tour of duty, he and his family traveled worldwide, including Germany and France. Hahn Air Force Base in Germany was one of his favorite tours. He also served in the Vietnam War. With a 20-year military career, he retired as Master Sergeant on December 1, 1971 in Lubbock, Texas. After his military career retirement, he also worked and retired from Bunge (Central Soya) in Decatur.
His first love was his wife and second love, Oliver Tractors, especially his Oliver 88. He loved working on and collecting Oliver tractors in addition to being a dedicated member of the Oliver Gang.
He faithfully read his Bible daily and up to the time of his passing was an avid reader of many books.
He is survived by his wife, the love of his life; four daughters, Sandra Parrish; Candice Bauman; Cindy Fruechte; and Susan Tonner; son, John Parrish, Jr.; seven grandchildren; 17 great-grandchildren; and one great-great-grandchild.
He was preceded in death by his parents; sister, Nancy Ward; brother, Kenneth D. Parrish; one grandchild; and one great-grandchild.
A celebration of his life was held Saturday, September 25.
Memorials may be made to Wounded Warrior Project.
Arrangements provided by Haggard-Sefton-Hirschy & Zelt Funeral Home in Decatur. To sign the guestbook, click on www.hshfuneralhome.com.