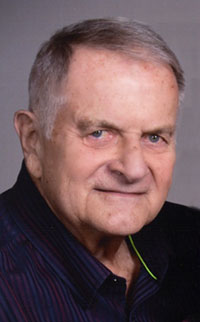 Rev. Jerry Flueckiger, 81, of Berne went home to be with his Lord and Savior on Sunday, October 6, 2019 at Swiss Village in Berne. He was born on April 26, 1938 in Decatur to John Flueckiger and Ella (Gerber) Scare. He was married on August 27, 1960 to Bonnie Cook.
He was a faithful member of First Mennonite Church in Berne, serving the Lord in many capacities as youth minister, Christian educator, interim pastor and the care and visitation pastor. He was also a Sunday school teacher, served on the church board and sang in the church choir and men’s chorus. He was also a past director of the Swiss Heritage Society and volunteered at Adams Memorial Hospital. He was elected to the Berne City Council for one term, served on the South Adams School Board for eight years and was a current board member of the Adams County Council on Aging for 21 years. He was a baseball coach for the Minor Leagues, Little Leagues and Pony Leagues and also coached basketball, football and wrestling. He also managed the Berne Community Pool for three years and sang with the Edelweiss Singers.
He held education to be very important. He graduated in June 1960 from Lakeland University with a bachelor of arts degree. From there, he received his master’s degree of education from St. Francis College and his masters of theology in 1963 from United Theological Seminary. He served the Lord as a pastor for over 55 years in St. Peter UCC in Van Wert, St. Paul UCC in Van Wert County, Toledo, Rockford, Ohio, St. John UCC in Vera Cruz, St. Luke UCC in Decatur, Cross UCC and First Mennonite churches in Berne. He was also a teacher for Van Wert, South Adams, and Bluffton – Harrison schools. He also coached sports at South Adams and Bluffton – Harrison schools.
He enjoyed woodworking, watching his grandchildren and attending their many activities. He was very active in the many activities offered at Swiss Village. He enjoyed working on jigsaw puzzles and singing with Swiss Village Singers as well as using the exercise facilities at the Village.
He is survived by his wife of Berne; two sons, Mark (Kim) Flueckiger of Huntington; and David (Debbie) Flueckiger of Fort Wayne; three brothers, Charles (Connie) Lane of Bryant; Elmer Scare of rural Geneva; and Phil (Teresa) Scare of Waterloo, South Carolina; sister, Elmyra Wolfe of Decatur; six grandchildren, Erica Kirchner; Kelcey Zaugg; Joy Miller; Calvin Flueckiger; Tyler Flueckiger; and Taylor Flueckiger; and nine great-grandchildren, Kaidon Flueckiger; Braxten Kirchner; Bohden Kirchner; Logan Kirchner; Degan Kirchner; Kacyn Zaugg; Kreighten Zaugg; Kashden Zaugg; and Kixley Zaugg.
He was preceded in death by his parents; daughter, Beth Maag; brother, David Scare; step-father, Karl Scare; and sister-in-law, Kathryn Esibell Scare.
Visitation will be from 10 a.m.-1 p.m. on Friday, October 11 at the Swiss Village Chapel and from 3-8 p.m. on Friday, October 11 at the First Mennonite Church Family Life Center and two hours prior to 2:30 p.m. funeral service on Saturday, October 12 at First Mennonite Church in Berne. Officiating will be Pastor Jeff Linthicum and Pastor Jim Schwartz. Burial will be at MRE Cemetery in Berne.
Memorials may be made to the Swiss Village Samaritan Fund or First Mennonite Assistance Fund.
Arrangements provided by Zwick & Jahn Funeral Home, Yager-Kirchhofer Chapel in Berne. To sign the online guestbook, visit www.zwickjahn.com.