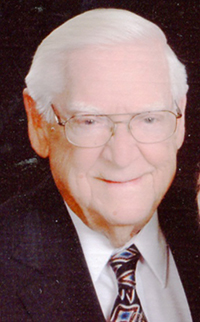 Howard J. Flueckiger, 98, of Berne passed away Monday, March 1, 2021, at Swiss Village in Berne. He was born January 23, 1923, in Berne to Elmer and Ida (Kauffman) Flueckiger. He was married June 23, 1946, to Bernice Nussbaum. She preceded him in death December 7, 1995. He was married in 1997 to Eleanor Kennel.
He was a veteran of the United States Army during WWII and was honorably discharged following his service. He was a member of the First Mennonite Church in Berne, where he served as an usher for many years. He was the co-owner/operator of Flick’s Body Shop in Berne for 31 years until his retirement in 1989.
He is survived by his wife of Berne; two sons, David (Sandy) Flueckiger; and Jim (Lora) Flueckiger, both of Berne; daughter, Sara (Greg) Meyer of Berne; sister, Shirley (Bill) Emshwiller of Cottonwood, Arizona; sister-in-law, Ardythe Flueckiger of Berne; brother-in-law, Paul Nussbaum of Berne; five grandchildren; and 11 great-grandchildren.
He was preceded in death by his parents; sister, Virginia Mattox; and two brothers, Valier and Bill Flueckiger.
Private family services will be held with Pastor Jim Schwartz officiating. Military honors will be conducted by the American Legion Post #468 Color Guard. Burial will be at MRE Cemetery in Berne.
Memorials may be made to the Swiss Village Samaritan Fund.
Arrangements provided by Zwick & Jahn Funeral Home, Yager-Kirchhofer Chapel in Berne. To sign the online guestbook, visit www.zwickjahn.com.