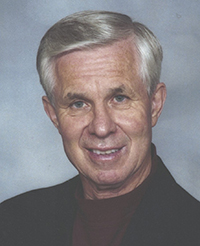 Glen L. Haines, 80, of Pennville passed away Tuesday, September 21, 2021, at Bluffton Regional Hospital in Bluffton. He was born December 30, 1940, in Decatur to Lewis and Opal (Reynolds) Haines. He was married in 1988 to Jone (Joni) Elaine Geesaman.
He was retired as a tool and die maker for Simons Manufacturing in Berne. He was a 1959 Geneva High School graduate, served in the U.S. Army from 1963-1965, was a member of the American Legion in Berne and attended Union Chapel Church.
He is survived by his wife; son, Craig (Darla) Haines of Fort Wayne; daughter, Stephanie (Jerry) Odom of Bella Vista, Arkansas; sister, Faye (Oren) Woodward of Berne; four step-sons, Nick (Darlene) Ray; and Rob (Robbie) Ray, both of Pennville; Christopher (Kathy) Ray of Bryant; and Jeffery (Nichole) Ray of Portland; eight grandchildren; and nine great-grandchildren.
Visitation will be three hours prior to the 4 p.m. funeral service Saturday, September 25 at Baird-Freeman Funeral Home in Portland. Officiating will be Pastor Mike Morgan.
Memorials may be made to Union Chapel Church or Gideons.
Arrangements provided by Baird-Freeman Funeral Home in Portland. Online condolences may be made at www.baird-freeman.com.