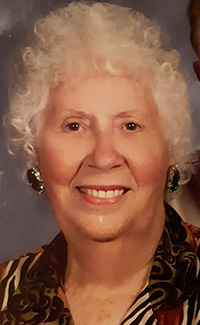 Dorothy Simon, 95, of Berne passed away Monday, October 5, 2020, at 5:45 p.m. at Chalet Village Health Care Center in Berne. She was born Friday, August 28, 1925, in Manteca, California to John and Jessica (Ehresman) Hart. She was married Saturday, October 3, 1987, in Lake Arrowhead, California to Floyd N.  Simon.
She formerly attended the Bethel Brethren Church in Berne. She lived in California most of her life and then moved to Berne in 2004. She did volunteer work at the Pomona Valley Community Hospital. She was a member of the E-Bell club, Women's Auxiliary at the Elks Club, the Assistance League and Red Hatters Club in Berne. She was active in the Chamber of Commerce and Junior Chamber of Commerce in Pomona Valley. She played the French horn at Modesta Junior College and the Pomona concert band. She was a fourth great-granddaughter of John Hart from New Jersey who was one of the signers of the Declaration of Independence. She was very thankful that she was able to take a trip to the Holy Land.
She is survived by her son, Robert Randy (Denise) Lepire of Florence, Oregon; daughter, Ginger (John) Eckead of Pomona, California; step-son, Barry (friend Shawn) Simon of San Dimas, California; two step-daughters, Annette (Skip) LaMay of Fairport, New York; and Betty (friend Daron) Forgacs of Canton, Ohio; brother-in-law, Roger Simon of Ridgecrest, California; three sisters-in-law, Louise Addington of Winchester; Jean Crandall of Berne; and Norma Whittenbarger of Decatur; special adopted friend, Tammy Finnigan of LaVerne, California; two grandchildren, Jenna (Christopher) Flaig of LaVerne, California; and Christopher (Sully) Eckead of Pomona, California; three step-grandchildren, Tyler Forgacs of Arizona; and Steven (Gena) Simon; and Bryan (Jamie) Simon, both of California; four great-grandchildren, Jayden, Presley and Travis Flaig of LaVerne, California; and Corbin Eckead of Pomona, California; and two step-great-grandchildren, Maverick and Jason Simon of California.
She was preceded in death by her parents; her husband on June 22, 2020; brother, Robert Ehresman; step-daughter, Cindy Marie Simon; step-sister-in-law, Lori Simon; three step-brothers-in-law, Henry Addington; Robert Crandall; and Larry Whittenbarger; step-son-in-law, Larry Forgacs; and step-nephew, Shane Whittenbarger.
Visitation will be one hour prior to the 2 p.m. funeral service on Saturday, October 10 at Bethel Brethren Church, 718 E. Main St., Berne. Officiating will be Pastor Joe Nass. Burial will be at MRE Cemetery in Berne. Due to the COVID-19 pandemic, everyone is asked to please practice social distancing while at the services.
Memorials may be made to Bethel Brethren Church, 718 E. Main St. Berne, IN 46711.
Arrangements provided by Downing & Glancy Funeral Home in Geneva. Online condolences may be made at www.glancyfuneralhomes.com.