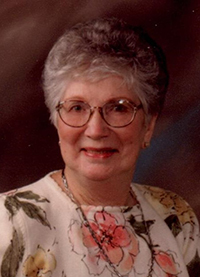 Dorothy J. Murphy, 96, of Decatur, passed away Monday, March 8, 2021, at Adams Woodcrest in Decatur. She was born April 11, 1924, in Fort Wayne to Lester G. and Amanda C. (Kelly) Robinson. She was married November 15, 1943, to Patrick Murphy.
She was a former parishioner of St. Mary of the Presentation (east of Geneva) and was currently a parishioner of St. Mary of the Assumption Catholic Church in Decatur. She was a former member of the Rosary Society. She had been a past member of Veteran of Foreign War Auxiliary and was also a member of Moose Lodge 625 Auxiliary and American Legion Post 43 Auxiliary. She was the last classmate surviving from the Geneva Cardinal’s class of 1942. She worked at General Electric, Franklin Electric and retired from Berco in Berne.
She is survived by her two sons, Steven (Carol) Murphy of Argyle, Texas; and Richard “Rick” (Candy) Murphy of Bluffton; a daughter, Susan Murphy (Sally Klotz – significant other) of Fort Wayne; three grandchildren; five great-grandchildren.
She was preceded in death by her parents; and her husband on April 13, 2005. She was the last of her siblings being preceded in death by three brothers, Eugene, Thomas and David; and five sisters, Charlotte and Catherine in infancy, Aveline, Barbara and Rita.
Visitation will be Friday, March 12 from 11 a.m.-12:40 p.m. at St. Mary’s Parish Hall with a reciting of the Holy Rosary at 12:40 p.m. A Mass of Christian Burial will be offered at 1 p.m. at St. Mary of the Assumption Catholic Church. Burial will be at St. Joseph Catholic Cemetery.
Memorials may be made to St. Joseph Catholic School or Heart to Heart Hospice.
Arrangements provided by Haggard-Sefton-Hirschy & Zelt Funeral Home in Decatur. To sign the guestbook, click on www.hshfuneralhome.com.