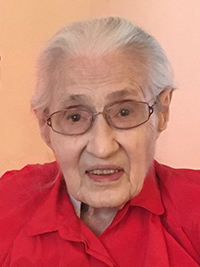 Doris Marie Tullis, 99, of Geneva passed away Sunday, January 16, 2022, at Envive Healthcare in Berne. She was born April 23, 1922, in rural Jay County to Harry and Elma (Walter) Brunson. She was married June 18, 1950, at Center Church in Jay County to Gerald Tullis.
She attended Center Grade School in Green Township and graduated from Pennville High School in 1939.  She was in 4-H for six years where she honed her skills as a seamstress and scratch cook extraordinaire.  She attended Indiana Central College (now University of Indianapolis) in 1939-1940, the only one of her family to do so. Before her marriage, she was employed in the office of the Jay Garment Company for four and a half years. Following their marriage, she and her husband resided in Monroe until 1994 after which they moved to their retirement home on Lake of the Woods in Geneva.
She was a devoted wife and homemaker and matriarch of the family. In addition to cooking and sewing, she enjoyed reading and gardening and supporting “her boys” by participating in PTA and as a Cub Scout den mother. She especially enjoyed getting together with family and friends and would invite anyone who was visiting to stay and eat.
She was a long time member of the Adams County Holiness Association and attended the Monroe United Methodist Church in Monroe and High Street United Methodist Church in Geneva before becoming a member of the Nottingham Friends Church in Wells County.
She is survived by two sons, Steven Tullis (Carol) of Carson City, Nevada; and Roger Tullis of Geneva; three grandchildren, Bryan Tullis (Tracy) of Commerce Township, Michigan; Alison Pinedo (Luis) of Indio, Califorina; and Jonathan Tullis (Matt) of Tucson, Arizona; and seven great-grandchildren, Landon and Luke Tullis; and Elizabeth, Isaiah, Monica, Joaquin and Anthony Pinedo; and several nieces and nephews.
She was preceded in death by her parents; her husband on September 2, 2003; son, Gary (Rose Mary) Tullis of Collierville, Tennessee on January 14, 2019; and six siblings, Donald, Lawrence, Gladys (Horn), Jane (Dilworth), Raymond and Earl.
Visitation will be Sunday, January 23 from 4-8 p.m. at Downing and Glancy Funeral Home in Geneva and one hour prior to the 11 a.m. funeral service Monday, January 24 at Nottingham Friends Church located in Wells County south of Bluffton on State Hwy 1 at 1100S. Officiating will be Pastor Randy Thacker and Rev. David Stalker. Burial will be at Gravel Hill Cemetery at Bryant. The family requests masking and distancing for those attending.
The family would like to thank the many caregivers and Geneva first responders for their assistance.
Memorials may be made to Nottingham Friends Church.
Arrangements provided by Downing & Glancy Funeral Home in Geneva. Online condolences may be made at www.glancyfuneralhomes.com.