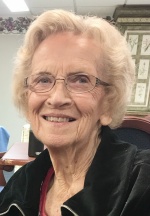 Doris Eleanor Liechty, 93, of Berne passed away peacefully on Wednesday, January 15, 2020 and was ushered into the everlasting life of the Spirit. She was born on December 20, 1926 at her home in Fort Wayne to Arly and Ruth (Clauser) Wulliman. She was married on May 31, 1947 in Fort Wayne to Lynn O. Liechty of Berne. They celebrated 62 years together.
She was a 1944 graduate of Fort Wayne Central High School. She worked at Lincoln Life as a stenographer for several years after high school and in the Yager Furniture office in downtown Berne. Later, she enjoyed working and interacting with customers at Sprunger Shoes in Berne for many years.
She was a member of the First Mennonite Church in Berne and was actively involved in many roles over the years. She led small group Bible studies and was a youth leader, assisted local migrants with childcare and hosted several children in her home through the Fresh Air summer program. She also traveled and served on the Lay Witness Mission, General Conference Mennonite Church Women in Mission, Women’s Council at Bluffton University and volunteered at Camp Friedenswald. In later years, she served on the Gift Discernment Committee.
She loved spending time with family and connecting with people and looked for the best in everyone. She was a leader in befriending new families and people in need in her community and developed many close and lasting friendships.
She is survived by her three daughters, Karen (Rick) Dubach of Berne; Jennifer (Jon) Zickafoose of Lima, Ohio; and Lisa (Todd) Liechty-Steele of Fort Wayne; son, John (Joy) Liechty of Goshen; 12 grandchildren; and eight great-grandchildren.
She was preceded in death by her parents; her husband; brother, Gerald “Jerry” Wulliman; and an infant daughter, Patti Jo, in 1950.
Visitation will be from 12-5 p.m. on Sunday, January 19, and the funeral service will be at 10 a.m. on Monday, January 20 in the Swiss Village Auditorium in Berne. Burial will be at MRE Cemetery in Berne.
Memorials may be made to the Swiss Village Samaritan Fund.
Arrangements provided by Zwick & Jahn Funeral Home, Yager-Kirchhofer Chapel in Berne. To sign the online guestbook, visit www.zwickjahn.com.