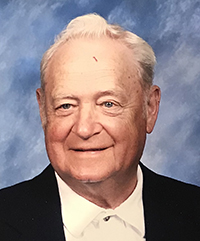 Donald L. Reef, 89, of Geneva, formerly of New Corydon, passed away Friday, February 21, 2020, at 9 a.m. at Swiss Village in Berne. He was born Saturday, October 4, 1930, in Flint, Michigan to S. Daniel and Mabel (Davidson) Reef. He was married Friday, October 20, 1950, in New Corydon to Margaret A. Weaver.
He attended Jefferson Township High School. He was a member of the Redeemer Lutheran Church in Bryant. He served his country in the United States Army. He was a member of the New Corydon-Bryant Senior Citizens Club. He worked as a state building inspector for 14 years, where he served nine counties. He worked at All American Homes in Decatur. He served as a Wabash Township-Jay County trustee and was also the caretaker of Daugherty Cemetery for 40 years.
He is survived by his wife of Geneva; two daughters, Beth A. (Robert) Martin of Decatur; and Carol L. (Randy) Elzey of Geneva; brother, James (Jean) Reef of Ossian; two granddaughters, Lora L. Brooks of Michigan City; and Lisa A. Martin of Decatur; step-grandson, Jason Elzey of Bluffton; and two step-great-grandchildren.
He was preceded in death by his parents; and brother, William Reef.
Visitation will be Friday, February 28 from 2-8 p.m. at Downing & Glancy Funeral Home, 100 N. Washington St., Geneva and one hour prior to the 11 a.m. funeral service Saturday, February 29 at Redeemer Lutheran Church in Bryant. Officiating will be Pastor Martin Bornhoeft and Pastor Robert Abner.
Memorials may be made to Redeemer Lutheran Church, PO Box 156, Bryant, IN 47326 or Family LifeCare, 108 S. Jefferson St., Berne, IN 46711.
Arrangements provided by Downing & Glancy Funeral Home in Geneva. Online condolences may be made at www.glancyfuneralhomes.com. 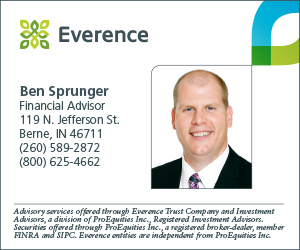