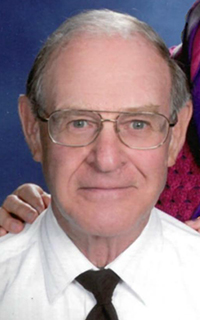 Charles Haddon Spurgeon, MD FAAN, 85, of Berne passed away Saturday, December 18, 2021, at Swiss Village Retirement Community in Berne following a diagnosis of Alzheimer Disease. He was born March 29, 1936, in Berne to William Hobart and Edna Estelle (Nussbaum) Spurgeon, M.Ed. He was married October 20, 1961, at West Missionary Church in Berne to Marilyn Mae Lehman.
He was a member of First Mennonite Church in Berne. In his professional life, he was a member of the Indiana Neurological Society (president 1972 - 1974), Indiana State Medical Association, Marion County Medical Society and the American Association of Neuromuscular & Electro Diagnostic Medicine. He was also a member of Indiana Nut and Fruit Growers Association, Master Gardner Association and Indiana Native Plant and Wild Flower Society.
He was a neurologist and professor of medicine. He received his bachelor of science from Wabash College in 1958 (Phi Beta Kappa) and his doctor of medicine from Indiana University, Indianapolis in 1962 (Alpha Omega Alpha). Following his education, his medical career started as a medical intern at the Minneapolis General Hospital from 1962-1963, United States Medical Corps Lieutenant Commander for Public Health Service from 1963-1965 in Oregon, neurology residency at Indiana University School of Medicine in Indianapolis from 1965-1968, assistant professor of neurology at IU School of Medicine in Indianapolis from 1968-1973, chief of neurology service at the Veterans Administration Hospital in Indianapolis from 1968-1995 and promoted to associate professor of neurology, IU School of Medicine in 1973.
Horticulture, Indiana natural history and agriculture were hobbies that he pursued throughout his life. He enjoyed rebuilding farm wagons and Hoosier kitchen cabinets. He loved planting Carya Genus trees and removing brush and unproductive trees in his woods. In fulfilling his life history of farming, he would keep in touch with local farmers who managed the farm ground in Berne on which he grew up on as a child and is still in the family today.
He is survived by his wife, Marilyn Spurgeon, BSN of Berne; and two daughters, Dacotah J. Spurgeon, MSPT, PA-C of Spokane, Washington; and Pamela K (Spurgeon) Peak, MD FACP IFMCP (Dallas E Peak, MD FACEP IFMCP) of Franklin.
He was preceded in death by his parents; and two brothers, Bill Spurgeon, Jr.; and John Edward Spurgeon.
Visitation will be one hour prior to the 10:30 a.m. funeral service Tuesday, December 21 at Zwick & Jahn Funeral Home, Yager-Kirchhofer Chapel in Berne. Officiating will be Pastor Jim Schwartz and Pastor Mike Wertenberger. Burial will be at MRE Cemetery in Berne.
Memorials may be made to Swiss Heritage Village and Museum, Swiss Village or Indiana Nut and Fruit Growers Association.
Arrangements provided by Zwick & Jahn Funeral Home, Yager-Kirchhofer Chapel in Berne. To sign the online guestbook, visit www.zwickjahn.com. 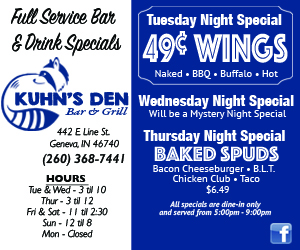