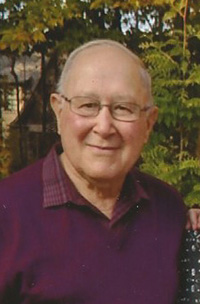 Carl F. Spangler, 88, of St. Henry, Ohio passed away Tuesday, May 5, 2020, at Lima Memorial Hospital in Lima, Ohio. He was born November 7, 1931, in Portland. He was adopted by Frank and Emma (Fetters) Spangler. He was married April 22, 1961, at St. Joseph Church in Egypt, Ohio to Velma Dahlinghaus.
He was a member of St. Henry Catholic Church, The Heritage Club and the Knights of Columbus. He lived a life of service. He was a veteran of the United States Air Force serving four years during the Korean Conflict in the security service communication department. He later served 15 years on the St. Henry Emergency Squad, was a volunteer 4-H advisor and was a member of the American Legion Post 648 in St. Henry, Ohio. He was an active volunteer at the Center for Neurological Development in Burkettsville, Ohio from 1996 until his time of passing. He also helped with the many senior citizens garage sales in Celina, Ohio. He enjoyed spending time with his family, especially during their family vacations as well as playing cards and watching his grandchildren’s sporting events and activities.
He is survived by his wife of St. Henry, Ohio; children, son, Bruce (Patty) Spangler of Coldwater, Ohio; two daughters, Mary Carla (Doug) Campbell of Stow, Ohio; and Marjorie (Chuck) Good of St. Henry, Ohio; seven grandchildren, Bethany and Blake Spangler; Lauren and Trent Campbell; Ryan (fiancé Chloe Grube) Good; and Kyle and Evan Good; brother, Jim (Margaret) Minch of Bryant; and in-laws, Betty and Melvin Bruggeman of McCartyville, Ohio; David and Pat Dahlinghaus of Minster, Ohio; Marcia Dahlinghaus of Golden Valley, Arizona; Omer Bertke of Coldwater, Ohio; and Marlene Dahlinghaus of Maria Stein, Ohio.
He was preceded in death by his parents; siblings, Charles and Lucille Muhlenkamp; and Howard and Lillian Minch; and in-laws, Rita Bertke; and Jim Dahlinghaus.
Due to the COVID-19 virus, a private mass of Christian burial with military honors will be held Friday, May 8 at St. Henry Catholic Church. The funeral mass will be live streamed for family and friends to view at sthenrycluster.com. Burial will be at St. Henry Cemetery.
Memorials may be made to the St. Henry Emergency Squad or the Center for Neurological Development in Burkettsville.
Arrangements provided by Hogenkamp Funeral Home in St. Henry, Ohio. Online condolences may be made at www.hogenkampfh.com.