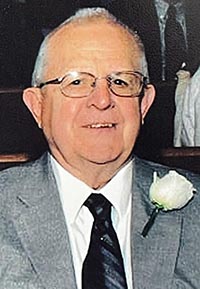 C. LaVerne Miller, 92, of Berne passed away Thursday, June 23, 2022, at Swiss Village in Berne. He was born November 21, 1929, in Mercer County, Ohio to Carl Frederick and Gertrude E. (Brewster) Miller. He was married November 8, 1953, in Berne to Martha L. Bailey.
He served his country in the United States Army during the Korean Conflict. He retired in 1995 from Berne Furniture Company with 27 years of service. He was a member of Bethel Brethren Church in Berne and taught Sunday school. He was also a member of the Monroe Lion’s Club and had previously served as the Monroe clerk treasurer. He was just a good man and the best family man.
He is survived by his wife of Berne; two daughters, Jacalyn (Dean) Zimmerman of Berne; and Pamela (Scott) Mitchel of Decatur; two sons, Bradley (Mary Jane) Miller of Syracuse; and Douglas (Michaeleen) Miller of St. Cloud, Florida; brother, Kenneth Miller of DeMotte; 11 grandchildren; and 10 great-grandchildren.
He was preceded in death by his parents; five sisters, Helen Linn; Anna Lou Kosier; Ruth Werner; Emilene Henkle; and Catherine Eichler; and brother, Herbert Miller.
Visitation will be Wednesday, June 29 from 3-5 to 6-8 p.m. at Zwick & Jahn Funeral Home, Yager-Kirchhofer Chapel in Berne and one hour prior to the 10 a.m. funeral service Thursday, June 30 at Bethel Brethren Church in Berne. Officiating will be Pastor Joe Nass. Burial will be at Backesto (Springhill) Cemetery in Berne. Military graveside services will be conducted by the American Legion Post #43 of Decatur.
Memorials may be made to Bethel Brethren Church or Stillwater Hospice.
Arrangements provided by Zwick & Jahn Funeral Home, Yager-Kirchhofer Chapel in Berne. To sign the online guest book, visit www.zwickjahn.com.