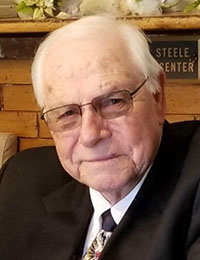 Billy W. Gaunt, 90, of Decatur passed away unexpectedly Tuesday, February 11, 2020, at his residence. He was born June 13, 1929, in Adams County to Wayne Z. and Elma R. (Bittner) Gaunt. He was married March 11, 1951, in Pleasant Mills to Betty C. Young.
He served his country in the Naval Reserve during the Korean conflict. He was a member of Salem Community Church, Amateur Trap Association and St. Mary’s Blue Creek Conservation Club. He enjoyed helping with the Eddie Eagle Gun Safety Program in the North Adams School District.
He was a graduate of Decatur High School. After high school, he was drafted by the Brooklyn Dodgers in New York. He retired in 1987 from Phelps Dodge Magnet Wire with 28 years of service.
He was a family man and enjoyed spending time with his family. Among his many hobbies, which included traveling and hunting, his favorite past time was bass fishing. In his younger years, he and his wife were able to visit 49 of the 50 states, missing Alaska. He could be found watching many different sporting events in the front room of his house at any time, but his favorite sport and team would always be IU basketball.
He is survived by two daughters, Diane (Art) Crozier; and Linda (Dr. Ron) Hammond, both of Decatur; two brothers, Tom Gaunt; and Roger (Beverly) Gaunt, both of Decatur; sister, Mary Lou Gribler of Decatur; five grandchildren, Tasya (Jeremy) Hannon; Ian Beres; Tonya (James) Teer; Dr. Allyson (Ryan) Feasel; and Ashley (Zach) Grey; and five great-grandchildren, Mercedes Hannon; Quinten Teer; Kairos Feasel; Kannan Feasel; and Kayson Feasel.
He was preceded in death by his parents; his wife on March 30, 2001; and sister, Elnora Braun.
Visitation will be from 2-6 p.m. Saturday, February 15 and two hours prior to the 2 p.m. funeral service Sunday, February 16 at Zwick & Jahn Funeral Home in Decatur. Officiating will be Pastor James Compton. Burial will be at Tricker Cemetery.
Memorials may be made to Salem Community Church or Blue Creek Conservation Club.
Arrangements provided by Zwick & Jahn Funeral Home in Decatur. To sign the online guestbook, visit www.zwickjahn.com.