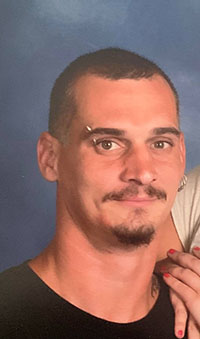 Billy Jack "B.J." Fisher, 37, of Geneva passed away at 8:55 p.m. on Monday, September 2, 2019 due to injuries sustained in a vehicle accident in Jay County. He was born on Saturday, November 7, 1981 in Galveston, Texas. He was married on Monday, August 8, 2016 in Geneva to Courtney Turner.
He attended South Adams High School. He was a welder at Wayne Metals in Markle. He attended the Global Vision Bible Church. He enjoyed woodworking, scraping, reading the Bible and loved being outdoors. He was a gentle giant with a heart of gold.
He is survived by his father, William Eugene "Gino" (Kathy) Fisher, II of Rockford, Ohio; his wife of Geneva; two daughters, Kyndall (Scott Atkinson) Fisher; and Brooklinn Fisher, both of Geneva; son, Jacob Fisher of Geneva; step-son, Bryan Easterling of Geneva; grandson, Asher Atkinson of Geneva; sister, Casey (John) Smith of Geneva; three brothers, Jimmy (April) Pennington of Pennville; and Jason Fisher; and Joshua Fisher, both of Rockford, Ohio; paternal grandmother, Harriett Fisher of Berne; maternal grandparents, Larry and Brenda Galloway of Geneva; and Bonnie Torgerson of Salina, Utah; and maternal great-grandmother, Beulah Galloway of Geneva.
He was preceded in death by his mother, Tracy Lee (Galloway) Crane; paternal grandfather, William Eugene Fisher; and his uncle, Russell Wade Galloway.
Visitation will be from 12-2 and 4-8 p.m. on Saturday, September 7 and one hour prior to the 11 a.m. funeral service on Sunday September 8 at Downing & Glancy Funeral Home, 100 N. Washington St., Geneva. Officiating will be Jesse Fennig. Burial will be at Riverside Cemetery in Geneva.
Memorials may be made to the Adams County Animal Shelter,  2168S 300E, Monroe, IN 46772 or Geneva Church of the Nazarene, 225 Decatur St., Geneva, IN 46740.
Arrangements provided by Downing & Glancy Funeral Home in Geneva. Online condolences may be made at www.glancyfuneralhomes.com.