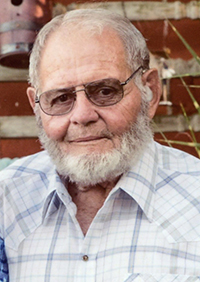 Bill W. Reynolds, 82, of Berne went home to be with his Lord and Savior on Thursday, November 14, 2019 at Parkview Regional Medical Center in Fort Wayne following a brief illness. He was born on September 24, 1937 in Berne to Woodrow and Martha Elizabeth (Balsiger) Reynolds. He was married on March 20, 1960 at Cross Church in Berne to Sally Rose Beer.
He served his country in the Indiana National Guard. He was a faithful member of St. Luke Church of rural Decatur and served as a trustee. His and his wife were past Horse & Pony Club leaders with the Adams County 4-H. He was a member of the National Quarter Horse Association and past board member of Adams-Wells Training Center.
He was a graduate of Berne-French High School class of 1955 and was employed with Franklin Electric as a millwright and retired in 2000 with 40 plus years of service.
He had a passion for raising domestic and exotic animals. He loved sharing his animals with anyone who stopped by and also with various organizations in the area. He enjoyed attending numerous exotic animal sales but most of all he valued his relationships built with people across the country in attending the sales. He had a servant’s heart and passion for helping people and would drop everything to help someone out. He was very well known in the Amish community and valued those relationships built over the years. He was an avid reader and a passionate fan of Adams Central wrestling. He loved spending time with his family, especially his grandchildren...cherishing his time spent with each one.
He is survived by his wife of Berne; four sons, Chad (SueAnn) Reynolds of Berne; Shane (Rhonda) Reynolds; and Dr. Jade (Julie) Reynolds, both of Decatur; and Dr. Trent Reynolds of Bellefontaine, Ohio; brother, Tom (Jean) Reynolds of Berne; niece, Lori Ann Reynolds; brother-in-law, Max (Karen) Beer of Berne; 12 grandchildren, Caitlyn Reynolds; Camille (fiancée, Chris Laughlin) Reynolds; Cassandra Reynolds; Amanda Reynolds; Chance (Natalie) Reynolds; Abby Reynolds; Cashton Reynolds; Chloe Reynolds; Zane Reynolds; Zeke Reynolds; Gideon Reynolds; and Gabriel Reynolds; and one great-grandchild, Aubrey Reynolds.
Visitation will be from 2-8 p.m. on Wednesday, November 20 at Zwick & Jahn Funeral Home – Yager-Kirchhofer Chapel in Berne and one hour prior to the 10:30 a.m. funeral service on Thursday, November 21 at St. Luke Church in rural Decatur. Officiating will be Pastor Mike Wertenberger. Burial will be at MRE Cemetery in Berne.
Memorials may be made to St. Luke Church Building Fund, C&C Bible Fellowship or Heifer Project International.
Arrangements provided by Zwick & Jahn Funeral Home, Yager-Kirchhofer Chapel in Berne. To sign the online guestbook, visit www.zwickjahn.com.