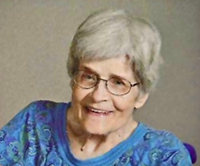 Anna Jane (Habegger) Fennig, 89, was born June 21, 1931, to David and Barbara (Amstutz) Habegger in Monroe Township, Adams County. She had a wonderful upbringing in the Berne area and was active in the First Mennonite Church and in any musical opportunity that came her way. She graduated from Berne-French High School and attended Fort Wayne Bible College and Biola University. She married Martel Fennig on August 14, 1953, and together they began their life of service and adventure.
In 1957, with two toddlers in tow, they moved to Kenya, East Africa, where they were missionaries with Africa Inland Mission until their retirement in 1993. As true partners, they built and staffed three different boys’ high schools, turning them over to Kenyans once they were established and then moving on to the next school. She played many roles in these endeavors: station hostess, English and music teacher, secretary and faithful letter-writer, though her favorite role was playing her little portable pump organ and leading the students in enthusiastic singing of the great hymns of the faith. She learned to make do with limited electricity and running water and scarcities of all kinds. To her children she seemed unflappable in the midst of floods, droughts, poisonous snakes, enormous insects, limited finances and regular bouts of malaria.
She was passionate about music and could sing soprano, alto or tenor, whichever was the needed part. Her piano skills were sought after because she could play by ear in whatever key was desired, as well as read any music put in front of her. Part of her precious cargo when she left for Kenya were recordings of all of Beethoven’s symphonies and of course her beloved Handel’s Messiah. She also used her hands to make thousands of batches of doughnuts, sweet rolls, sticky buns, pies and cookies, all of which helped establish their home as the place to be. As her life slowed down, she became a sudoku aficionado and a constant reader.
After their retirement, she and her husband continued to volunteer for months at a time in Kenya and Namibia. She was in a horrific car accident on February 11, 2003, which took the lives of her husband and her son Joe and left her permanently disabled. Since then, she has been a resident of Swiss Village where she received compassionate and loving care. In spite of being in constant pain, she lived her years there without complaint or self-pity, bringing joy to those around her and ministering to anyone who came in contact with her. Above her bed was the verse she lived by: “Rejoice in hope, be patient in tribulation, be constant in prayer.” (Romans 12:12)
Her earthly life ended Thursday, February 11, 2021, on the 18th anniversary of the accident that took her husband and son from us all. Though our lives are diminished without her faithful presence and daily prayers, she now inhabits eternity and is hearing the words, “Well done, good and faithful servant.”
She is survived by her four children, Chuck (Carole) of Duncanville, Texas; LeAnne (Tom) Johnson of Lafayette; Barbara of Fort Wayne; and Sue (Dan) Skiendziel of Chelsea, Michigan; and eight grandchildren, Daniel, Jonathan, and Matt Fennig; Alex (Laura) Johnson; Meredith and Heather Johnson; Arik and Stefani Skiendziel.
She was preceded in death by her parents; her husband; son, Joseph Fennig; step-father, Marcus Sprunger; two brothers, Glenn (Ruth) Habegger; and Merlin (Delores) Habegger; sister, Donna Mae; and two step-sisters, Marcella (Adam) Liechty; and Eileen (Ernest) Sprunger.
A memorial service will be held Saturday, March 20 at 11 a.m. at the First Mennonite Church in Berne. A private burial service will be held prior to the public memorial service. The family asks that masks be worn at the service.
Memorials may be made to Swiss Village or the Mennonite Choral Society of the First Mennonite Church of Berne.
Arrangements provided by Zwick & Jahn Funeral Home, Yager-Kirchhofer Chapel in Berne. To sign the online guestbook, visit www.zwickjahn.com.