Wendy J. Striker, 64, of Berne passed away Friday, August 14, 2020, at her residence following a brief illness.
She was born December 10, 1955, in Adams County to Ernest and Eileen Sprunger. She was married to Doug Meshberger, who preceded her in death in 1989. She then married Tod Striker on October 26, 1990.
She was a 1974 graduate of South Adams High School. She was employed at Berco in Berne for 27 years. She then worked at Berne Community Markets as the produce manger for 10 years before retiring this year.
She adored her children and granddaughters. She loved attending her kid’s sporting events when they were younger. She was an excellent cook and baker for her family and friends.
She is survived by her husband of Berne; two daughters, Lindsey (Tyler) Sherman of Lafayette; and Laura Brown of Tempe, Arizona; son, John (Emily) Striker of Liberty Center; sister, Becky (Steve) Billington of Bryant; three brothers, Mark Sprunger; and Dale (Sue) Sprunger, both of Berne; and Tom Sprunger of Portland; mother and father in-law, Rosalyn (Bo) Neuenschwander of Berne; and three granddaughters; McKenzie, Scarlett and Fiona Striker.
She was preceded in death by her parents.
Visitation will be Monday, August 17 from 4-8 p.m. and one hour prior to the 2 p.m. funeral service Tuesday, August 18 at the Zwick & Jahn Funeral Home, Yager-Kirchhofer Chapel in Berne. Officiating will be Pastor Jay Carter. Burial will be at MRE Cemetery.
Memorials may be made to Heart to Heart Hospice.
Arrangements provided by Zwick & Jahn Funeral Home, Yager-Kirchhofer Chapel in Berne. To sign the online guestbook, visit www.zwickjahn.com. 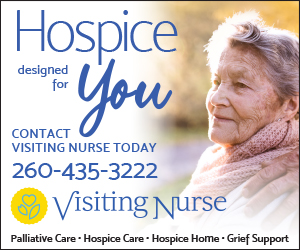