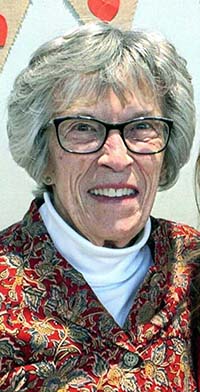 Virginia “Ginny” Lehman Hayes, 87, of Kendallville passed away on Saturday, November 6, 2021, at her home. She was born October 9, 1934, in Ashtabula, Ohio to Menno I. and Helen (Cleveland) Lehman. She married November 30, 1957, in Berne to Joseph B. Hayes.
A graduate of Berne-French Township High School of Berne and Baldwin Wallace College of Berea, Ohio, she taught home economics in Rochester, New York and Portland. She trained as a swim instructor as a staff member at Chester YWCA in Chester, Pennsylvania. After the family relocated to Kendallville, she continued swim instruction at Bixler Lake. When the Cole Center YMCA of Kendallville opened, she served as the aquatic director and the executive director. Her most loved job was teaching swimming to community members aged six months to 88 years.
She was also the assistant general manager of the Potawatomi Inn at Pokagon State Park. As the special events coordinator for the Indiana State Park Inns, she ran the Elderhostel/Road Scholar and the Road Rally programs.
A member of The Indiana Descendants of the Mayflower, she served on the executive committee as board secretary. She was currently a member of the Pokagon Chapter of DAR, the Indiana Descendants of the Mayflower Society, Soule Kindred (George Soule, Pilgrim), Quest Club and Trinity Church United Methodist.
She enjoyed traveling and planning reunions for her high school classmates, Elderhostel and family. She has also written histories for her family members, including her husband, her Descendant of the Mayflower mother and Swiss ancestry father, grandfather and great-grandfather in Berne.
She is survived by two daughters, Susan (Christopher) Courter of Fairfield, Ohio; and Judith (Craig) Huss of Rancho Palos Verdes, California; four grandchildren, Jeremy (Tasha) Courter; Joshua (Dora) Courter; Keila Huss; and Henry Huss; four great-grandchildren, Ben Courter; Jack Courter; Juno Courter; and Mace Menno Courter; and a niece and two nephews and their families.
She was preceded in death by her parents; her husband in 2015; son, Robert in 1987; and sister, Barbara Lehman Henderson in 2012.
Visitation will be one hour prior to the 12:30 p.m. funeral service Saturday, November 13 at Young Family Funeral Home, Kendallville Chapel, 222 S. State St., Kendallville. Officiating will be her longtime friend, Regan Ford. Burial will follow at 3 p.m. at MRE Cemetery in Berne.
Memorials may be made to the Cole Center Family YMCA Scholarship Fund for Senior Citizens in Kendallville.
Arrangements provided by Young Family Funeral Home in Kendallville. Online condolences and memories may be made at www.youngfamilyfuneralhome.com.