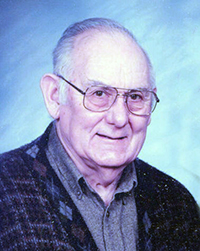 Ralph F. Schaadt, 89, of Bluffton passed away Tuesday, February 16, 2021, at Bluffton Regional Medical Center. He was born September 1, 1931, in Rockford, Ohio to Victor and Luella (Affolder) Schaadt. He was married January 28, 1956, at the Reiffsburg United Methodist Church to Virginia Cochran. They celebrated 64 years of marriage prior to her passing.
He was a 1949 graduate of Rockford High School in Rockford, Ohio. He was drafted by the U.S. Army during the Korean War and served from July 1953 to July 1954. He sold insurance for many years with Graber Insurance in Berne. He was a member of the Bethel Brethren Church in Berne.
He is survived by two daughters, Pamela (Bill Young) Britton of Roanoke; and Kristy K. (Jeff) Hensley of Bluffton; two sons, David M. (Carolyn) Schaadt of Leo; and Richard A. (Gretchen) Schaadt of Churubusco; 12 grandchildren, Victoria D. (Kyle) Duncan-Dildine; Daniel T. Duncan; Tyler S. (Rachel) Duncan; Ryan M. (Gabrielle) Schaadt; Andrew M. Schaadt; Audra L. (Ryan) Hilker; Dustin (Kayli) Hensley; Natasha V.R.(Brandon) Swygart; Collin D. (Anna) Hensley; Aiden L. Miller; Olivia L. Schaadt; and Zeke A. Schaadt; seven great-grandchildren, Alaina G.M. Dildine; Leelah F.D. Dildine; Eleanor V. Schaadt; Judah M. Hensley; Elon J. Hensley; Evered Hensley; and Adaline G. Hensley; brother, John (Cathy) Schaadt of Decatur; and sister-in-law, LaDonna Schaadt of Berne.
He was preceded in death by his parents; his wife on October 28, 2020; and brother, William Schaadt.
Visitation will be two hours prior to the 3 p.m. funeral service Sunday, February 21 at the Thoma/Rich, Lemler Funeral Home in Bluffton. Officiating will be Pastor Joe Nass. Burial will be at Stahl Cemetery in rural Bluffton.
The safety of the family and all visitors is the utmost priority. For everyone’s safety, please practice social distancing. Masks are required for visitation and for the service. During the current guidelines, a limited number of people are allowed in the building at a time. Your cooperation and patience is appreciated. Due to the current circumstances, the family understands if you are unable or uncomfortable to attend the visitation or service. He would never want anyone to be at risk or uncomfortable.
Memorials may be made to Bethel Brethren Church in Berne.
Arrangements provided by Thoma/Rich, Lemler Funeral Home in Bluffton. Online condolences may be made at www.thomarich.com.