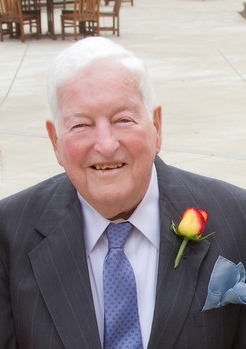 He was a member of the First Mennonite Church, where he was active on various committees. He was a WWII veteran serving in the U.S. Navy. He was a dentist in Berne for 43 years. He was past president of the Issac Knapp Dental Society and was appointed for nine years to the State Board of Dental Examiners. He was recipient of the Indiana Sagamore of the Wabash award and received the Distinguish Award from the State Dental Board. He was active in civic affairs and served on the city council. He was a member of the Berne Rotary Club and the Chamber of Commerce and was an Eagle Scout. He was an avid fan of Indiana University sports and Yankee baseball. He loved to fish, especially in Canada where he made an annual trip for 25 years. His greatest pleasure came from spending time with his family.

He was preceded in death by his parents; and his wife in 2008.

Visitation will be from 4:00 to 7:00 p.m. on Thursday, June 16 at Yager-Kirchhofer Funeral Home in Berne and one hour prior to the 10:00 a.m. funeral service on Friday, June 17 at the First Mennonite Church in Berne. Officiating will be Pastor Jerry A. Flueckiger. Burial will be at MRE Cemetery in Berne.

Graveside military rites will be provided by the Berne American Legion Post #468.

Memorials may be made to Four Seasons Center Employee Fund, 1901 Taylor Rd., Columbus, IN. 47203 or Reins to Recovery.