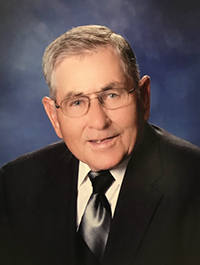 Bryce Christy, 87, of Berne passed away Sunday, August 30, 2020, at Swiss Village in Berne. He was born November 2, 1932, in Adams County to Ralph and Marie (Smitley) Christy. He was married July 26, 1952, at First Mennonite Church in Berne to Deloris Liechty.
He was a faithful member of First Mennonite Church in Berne and was very active with the Mennonite Disaster Service. He was employed with United States Post Office in Berne for 31 years as a rural mail carrier. He also previously served as the president of the Indiana Rural Mail Carrier Association.
He cherished and loved spending time with his family and had a servant’s heart for helping any of his family or friends. He enjoyed collecting stamps, coins and newspaper articles. After his “retirement” with the post office, he delivered R.V.s for over 17 years. He and his wife loved traveling all over the world.
He survived by his wife of Berne; daughter, June (Rick) Liechty of Berne; two sons, Kent Christy of Berne; and David (Sandy) Christy of Dallas, Georgia; sister, Ruth Christy of Charleston, South Carolina; eight grandchildren, Greg Christy; Gina Vinci; John Christy; Jason Christy; Jessica Singletary; John Christy; Jaclyn Byrd; and Kayla Shroyer; 22 great-grandchildren; and one great-great-grandchild.
He was preceded in death by his parents; and two sisters, Eloise Leistner; and Elaine Vanderlip.
Visitation will be two hours prior to the 2 p.m. funeral service Wednesday, September 2 at First Mennonite Church in Berne. Officiating will be Pastor Jim Schwartz. Burial will be at MRE Cemetery in Berne.
Memorials may be made to MDS (Mennonite Disaster Service) or First Mennonite Church – missions.
Arrangements provided by Zwick & Jahn Funeral Home, Yager-Kirchhofer Chapel in Berne. To sign the online guestbook, visit www.zwickjahn.com.